“New York is full of a bunch of wimps” – Adrienne Steinocher

We did it. We flew into New York City right before a blizzard and flew out right after the city recovered. Our trek to NYC proved quite the adventure. Our flight snuck out of Dallas right before of all the cancellations. We landed in the city that never sleeps just before the snow, as everything began to close for the impending blizzard deemed Stella. Schools, libraries, museums, trains and more shut down throughout our first evening there. We went to sleep as the snowy sky stood looming above the towering skyline. When we awoke, about eight inches of fresh snow blanketed the city, and still continued to swirl down from in between skyscrapers.

If you know anything about the Steinocher clan, you know that nothing stops us. A Steinocher reigns synonymous with the likes of Winston Churchill or a toddler in that we will remain stubborn to the bitter, bitter end. So when we saw the snow and all the closings as we watched newscast after newscast relay the dire conditions, we simply layered up a bit more and began our adventure.

What we did not take into account – not everyone holds our steel like resolve. New York did indeed shut down despite multiple New Yorkers confirming with me prior to landing that New York stays open no matter what. We wandered past closed establishment after closed establishment. Fearing we may go hungry, we did find some loyal chains open. A cardinal sin of traveling, we broke the rule, as a hungry Steinocher acts far worse than the hangry Snickers commercials.

Layering up for our adventure.

My parents enduring a blizzard with me.

Visibility was a little low. View of the Empire State Building from the Flatiron

On our first full day there, everything we wanted to see or do closed shop. We trudged through a blizzard the entire day, a blizzard. Times Square, my least preferred place in all of Manhattan, stood desolate compared to a regular Tuesday. As we wandered around the city, our minimal plans shot, I began to laugh to myself. Is God not funny?

When we come up with these grand plans and dream of what they will look like, our minds never factor in the blizzard. We do not dream of the unforeseen circumstances we so often find ourselves in.

I never thought I would meander through a spring break blizzard and find it enjoyable. I also never thought I would find myself thirty and single in a city I planned to live in for one year post graduation. I did not plan to stand as the sole single Steinocher at holidays. Or enter my ninth year of teaching at the same school. I never even thought about starting a blog or getting a tattoo. And yet, these unforeseen events led me to some of my greatest memories. Even in the midst of some of my greatest pain, the storms I found myself in propelled me to places I never would see myself going. But those places that seemed so desolate and ached with agony hold such beauty and value for me now. What I did not plan for me pushed me to grow in more ways than I ever imagined. 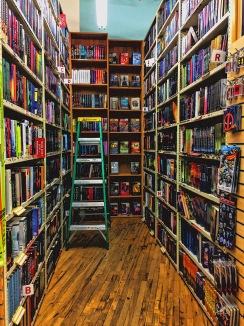 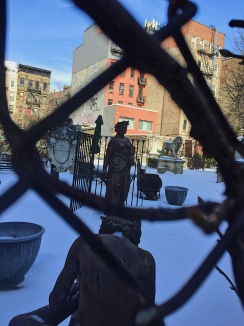 A closed view of the Empire State Building

And still, I stand shocked and appalled when my wonderful plans do not pan out. In the past it would take me very extended amounts of time to adjust to God’s plan as I clung to what I knew should happen instead of what God had for me. So, maybe I grew some in that regard.

But still, when this movie-like plan I create in my mind does not happen I tend to scoff. The more important part, (in time) I trust. I trust that even though what I think should happen does not happen, I trust God is good and right. I trust He sees something bigger I can’t yet fathom. I trust His path is perfect despite the twists, turns, valleys, deserts and blizzards. I trust that though it may seem like a wild goose chase, God leads us to the exact place where He will use us. He drops us little bits of fruit to remind us, sometimes we just need to open our eyes to the beauty He lays before us.

As we walked the empty streets of Manhattan, the three of us laughed as we discussed what we hoped to do in NYC. Me, I just wanted that spinach gnocchi and to make a snow angel in Central Park (because let’s be honest, I may never get the chance to do that again!) My dad, he wanted to go to The Met. Our second day, it reopened and we wandered through bits and pieces of it. The genius of it, my dad now wants to return to The Big Apple someday to see the rest of the vast museum. Something he probably would not desire had the blizzard not happened. My mom, elated to stand with her feet back in New York City in the snow (two of her favorite things), made the somewhat offhanded remark of how the only thing that could make this any better, “seeing a bulldog in the snow in New York City.” I kid you not, we turned a corner and met Wally, the bulldog. Most of what happened on our excursion I did not include as part of the dream sequence I created in my mind when I decided to go to The Empire State again. But what happened, though far from what I painted in my mind, proved way more entertaining and full than what I thought I wanted. 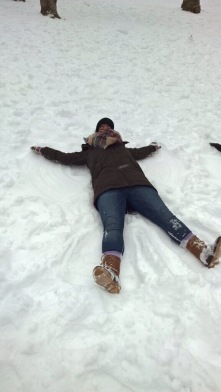 As unforeseen blizzards and circumstances blow through and alter the perfect adventure you think you should experience, remember to step back and look for the adventure unfolding within storm. Find the joy whether your adventure looks like you planned or doesn’t even resemble what you had in mind. Ask God to reveal the purpose in the midst of the pain and change you may find yourself. Make a conscious effort to seek out beauty no matter the circumstance.

Today our class hosted a “Pancake Brunch” for our office staff. Collaboratively, we created invitations, menus, place cards, a shopping list, arranged flowers, welcome signs and more. First years helped decorate and set the tables. Second years (carefully) chopped up a fruit salad. And third years flipped the pancakes to perfection. Our special guests arrived, and let me tell you, it was truly the most beautiful experience. I was not expecting to be so blown away by the joy that radiated from our room today. At the end of brunch, each person, including our hard working office staff and admin, got one special individual card. And then we shared our traditional Friday dance party with those who could stay! While I’m exhausted and still smell like breakfast, this is hands down my new favorite Valentine’s Day tradition. #montessori #publicmontessori #teacher #valentines
This kid is going places. #teacher
Spent Christmas snuggling sweet little John Ellis, who the pediatrician said was advanced, so clearly we’re related. @aspencer5 thanks for hosting me and letting me hold your precious little “bubby” all week.
Solving multiplication problems like 286 x 13 is no big deal when you use concrete materials like the stamp game. #montessori #publicmontessori #teacher